with additional music and lyrics by Bobby Greene 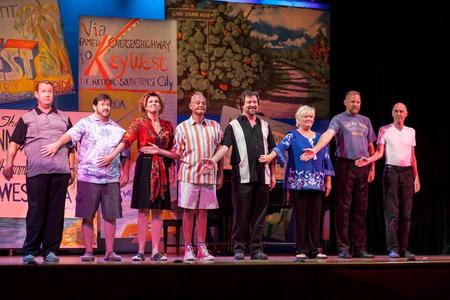 This rollicking musical chronicles Key West's strange-but-true 1982 "secession" from the United States to form the independent Conch Republic.
----------------
SYNOPSIS
The sudden appearance of a roadblock at the main highway entry to the Keys threatens a recent surge of tourism that has been keeping the city of Key West afloat. Mayor Dennis Wardlow and his compatriots try desperately to figure out how a laid-back town can stand up to unsmiling federal forces that ignore their pleas. The local "Conchs" - Bubba, a bar owner; Maria, a baker; and Steve, a drag queen - despair as they feel the effects of tourist dollars evaporating like moisture in the Key West summer sun.

All the fussing and fuming result in a hilarious, spontaneous, true-to-life battle that is still celebrated annually in Key West. It was and is a true reflection of Key West ingenuity and style - the "Conchs" versus the feds, in one of the greatest PR stunts in history!